Mario’s Movers was formed  37 years ago, by Mario Henry, who traded at the time as Mario’s Micro Movers, it later became Mario’s Movers.

In the beginning, Mario operated with only a “bakkie”, moving anything for an income, but gradually gravitated towards furniture removal. He traded mainly in Gardens, Atlantic Seaboard and the Southern Suburbs as a driver-owner, operating from rented premises in Wesley Street, Gardens, Cape Town.

In the mid-90’s, his brother Angelo joined the company, bringing with him years of experience gained whilst working in the banking industry. Shortly thereafter they moved to rented premises in Paarden Eiland, a few years later they purchased their own premises in Parow Industria (the site of the old Orbit Motors).

The premises in Parow Industria are now known as Mafalda Park (named after their late mother, Mafalda Sorbini, from Verbania, Italy). The brother’s mother, Mafalda and father, Clyde, met during World War II, while Clyde was fighting with the allies, liberating Italy from the Nazis. Clyde met Mafalda in Stressa, Italy. Europe was in ruins after the war and after being married a few months, Clyde and Mafalda left Europe to start their married life in Cape Town. Clyde who is originally from St Helena Island, fought with the allies, with distinction, in both North Africa and Italy. Sadly both parents have now passed, however the brothers maintain strong family ties with their many cousins who currently reside in Treviglio, near Milan, Italy.

Mario’s Movers, have storage facilities which are situated at Mafalda Park (see images below), they also have various independent units which are available for subletting; the size of each unit is approximately 300 square metres. These units are situated in a fully walled secure industrial park, with 24-hour cctv coverage as well as an on-site security guard, who monitors strict access control 7 days a week, 24 hours a day.

The Supervisors at Mario’s Movers have a minimum of 10 year’s experience on average and some, over 20 years (see picture below of our “Honour Board” in respect of long serving staff members). All staff have been trained by Mario personally, who has imparted his knowledge and experience of furniture removal over the years and impressed upon them the importance of good customer service.

Although price is understandably important, Mario’s Movers work on the premise that a satisfied customer and good customer service, coupled with careful planning and handling of each clients possessions, far outweighs the need to provide a “cheap” price at the expense of a job well done. Having said that, they are willing to compete with any reputable removal company who is a member of the PMA (Professional Movers Association) and upon sight of their quote, are always willing to match or better their price, subject to availability.

Our staff mirror’s management’s determination to provide a superior personal moving experience in all aspects, from the time we first receive your enquiry until completion of the service requested by you. 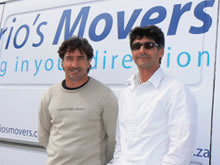 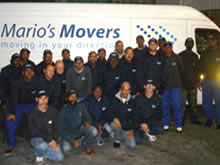 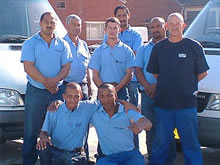